David Spaltro's In the Dark 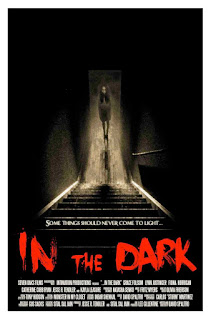 Cody gets an early look at the supernatural horrors that are In the Dark. 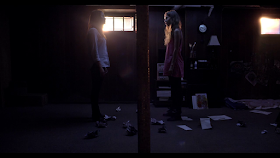 For over twenty years, Doctor Lois Kearne (Fiona Horrigan), head of the Parapsychology Department of Columbia University, has been investigating claims of the paranormal. In that time, she has worked on two hundred cases, and only three of those were actually something other than a hoax or something that couldn't be explained away with science. The three cases she verified as paranormal activity: a woman with telekinetic abilities, a haunting, and a possessed boy whose unsanctioned exorcism ended in tragedy. What she witnessed during the possession case has driven her to drink.

Kearne will verify a fourth case over the course of writer/director David Spaltro's In the Dark, the filmmaker's third feature film and his first foray into the horror genre.

Kearne's latest case involves single mother Joan Mills (Catherine Cobb Ryan) and her adult daughter Bethany (Grace Folsom). For over twenty years, the Mills have lived in the same home, but recently things have started to get very strange in their household. What begins with a radio turning on by itself quickly grows into full-blown demonic possession, forcing Kearne to again face the sort of situation that left her traumatized.

Along for the ride with Kearne is grad student Veronica Carpenter (Lynn Justinger), who is observing Kearne as research for her thesis paper on the revelance of parapsychology in modern psychiatry. A skeptic, Veronica goes into the Mills home believing there's nothing that can't be explained, but she ends up experiencing some unexplainable things, things which have some impact on issues she's dealing with in her private life.

While the story presents some intriguing alternate possibilities that it might have been fun for the movie to play around with - for example, Bethany was in a serious accident not long before the movie begins, so it would have been interesting if the idea that the possession could actually be a symptom of brain trauma was more strongly considered - the fact that there is a supernatural force at work here is clear from the start, and Kearne quickly accepts it. It's somewhat of a missed opportunity that the film is so straightforward, but the way it's presented is still entertaining. 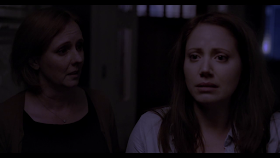 Attempting to do serious horror on a low budget can be very tough, but Spaltro didn't take his horror debut lightly. The filmmaker describes his film as a bloody Valentine to Stephen King, John Carpenter, The X-Files, and The Exorcist, and he did fine work making In the Dark an indie equivalent to modern hits like The Conjuring. Fantastic cinematography by Gus Sacks and a chilling score by Fritz Myers help Spaltro capture a dark, unnerving atmosphere.

In the Dark is a strong technical achievement, the only issues I had with it were in the acting department. While the film does feature some great performances from its small cast, there were moments where facial expressions seemed a bit off, or the lines didn't quite feel natural coming from the actors' mouths. Most of the movie is centered on the four female characters previously mentioned, but there is a male character who has a few scenes and I felt he was one of the movie's weakest links. The actress he shares those scenes with also becomes a bit shrill when dealing with him, so those moments weren't the most pleasant to watch. On the positive end, Folsom was the standout for me. She is incredible in the role of the beleaguered Bethany.

In the Dark will soon be making the festival rounds, where I hope it will be well received and end up landing a good distribution deal. Well made and creepy, it deserves to be seen by the horror audience, and I highly recommend checking it out if you get the chance. 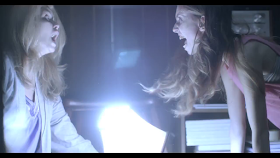