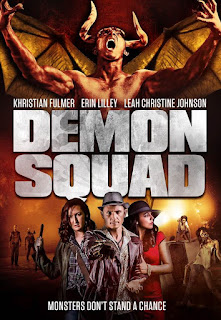 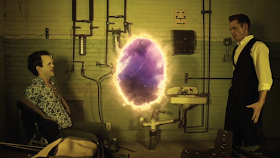 Director Thomas Smith's film Demon Squad has been on my radar for about four years now, ever since it was going by the title Full Moon Inc. (it was also briefly known as Night Hunters before ending up at Demon Squad). It took a while for it to make its way out into the world, and I would guess a big reason for the delay were the visual effects. Although this movie clearly had a very low budget, the indie look is sometimes blended with some visual effects that are quite impressive. If those are why it took four years for Demon Squad to be released, they were worth the wait.

The film caught my attention with the basic concept that it would be a blend of film noir, fantasy, and horror, and the story crafted by Smith and Erin Lilley mixes those elements together well. Played by Khristian Fulmer, lead character Nick Moon is a hard boiled private eye type with some magic tricks up his sleeve - along with some weapons. You don't often hear of Mobile, Alabama being a hotbed for paranormal activity, but that's where Moon has his office and it turns out the place is infested with all sorts of entities and creatures. As Moon explains it, his hometown of New Orleans became too commercial, so all the supernatural beings there moved over to New Orleans' sister city, Mobile.

And this was the first time I had heard Mobile referred to as New Orleans' sister city, so after the movie I briefly fell down the rabbit hole of looking up the shared history of the two cities. 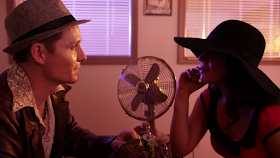 Moon is hired by the enchanting Lilah Fontaine (Leah Christine Johnson), who looks like the classic femme fatale, to find her missing archaeologist father and the recently acquired artifact that disappeared with him: a strange dagger that has some kind of power-generating core and is coveted by supernatural beings. So with the help of his secretary Daisy O'Reilly (Lilley), who has been anxious to go out in the field, and with some steampunk-style special equipment at hand, Moon sets out to solve the case and soon learns that the dagger could bring about an apocalyptic event. An event that would involve old gods like H.P. Lovecraft used to write about.

Of course, Moon also finds some time to romance Lilah on the way to saving the world.

Demon Squad puts a clever twist on familiar private eye scenarios, giving both Moon and Daisy some supernatural abilities and having them interact with various strange beings. You may have seen an investigator shake down a pimp before, but have you seen it done where the pimp has green skin and tusks? 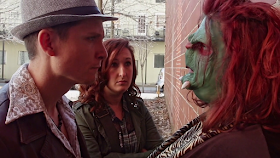 The cast of the film did great work with the material, with Fulmer, Lilley, and Johnson capably carrying the film as the leads. I'd be glad to see all three of them again in future projects. Well, we're already several years down the line from when they were in production on this one, so hopefully I'll be seeing them again in something else soon.

Although viewers will be able to tell that the movie was made on a minuscule budget just from the picture quality (except when those aforementioned visual effects are on the screen) and some of the sound, Smith and cinematographer Kris Skoda did an excellent job capturing the imagery. They may not have a lot of money to work with, but they definitely have the eye for filmmaking.

If you like private investigators, fantasy creatures, steampunk, and indie film, I would recommend watching Demon Squad when Wild Eye Releasing puts it out on DVD on June 25th. 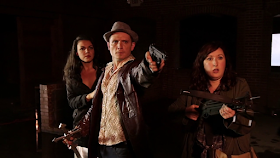